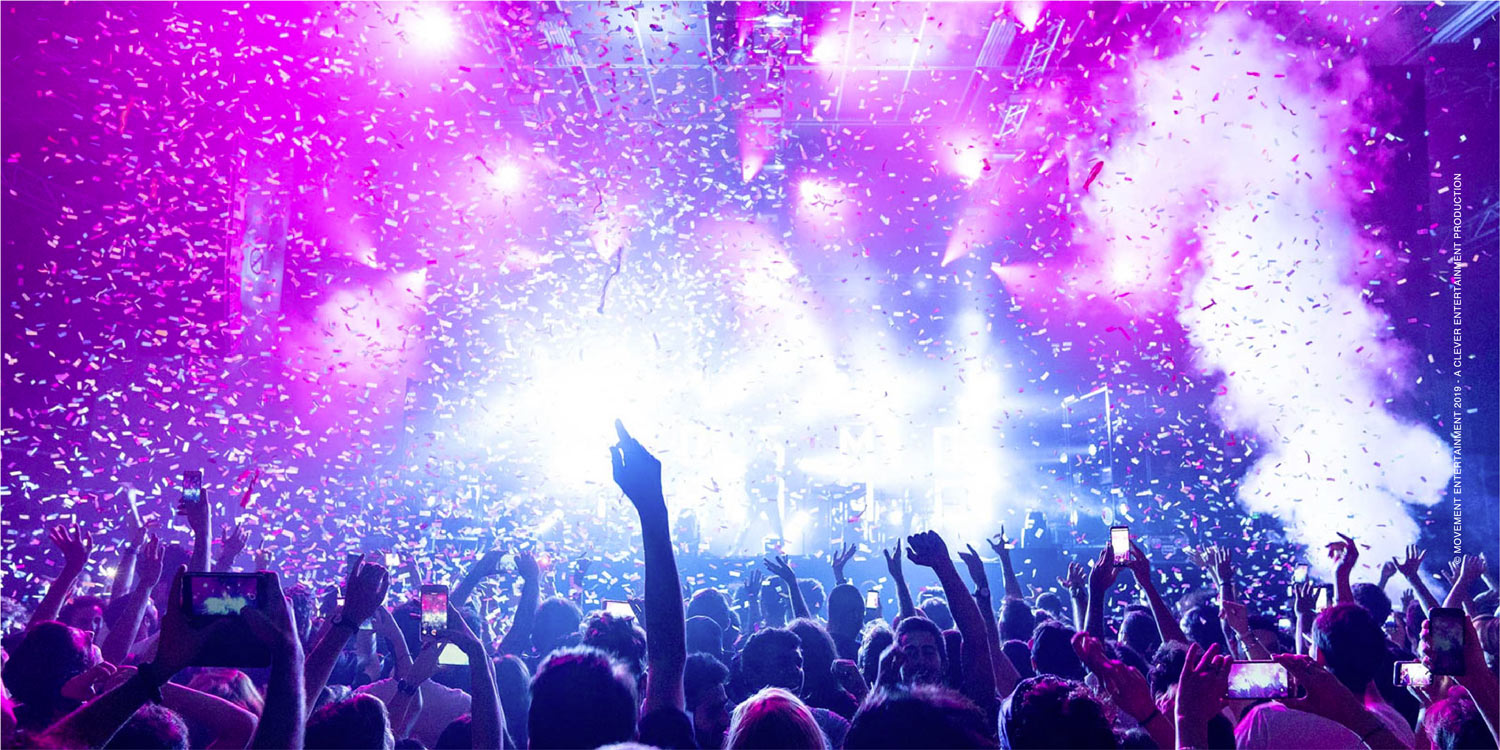 The music festival industry has become a highly competitive market place in the last couple of decades. During the summer months, Europe is awash with festivals, with a destination for everyone no matter what your musical preference, desired climate or budget. You can literally go from partying on a shoestring in the Spanish desert, to living it up like a VIP on a glacier in Iceland, and everything in between.

However, come the winter months, the outlook isn’t so bright. While most of the teams behind festivals are working on other projects or planning for next summer, there is one shining light in the later stages of the year.

Movement Torino is one of Italy and Europe’s leading electronic music festivals and this year takes place between October 31 and 2 November, making it one of the latest festivals of the European calendar and it’s also this week’s Festival of the Week.

Why Is It Our Festival Of The Week?

Now entering its fourteenth year, Movement Torino has established itself as one of Europe’s leading electronic music events. A sister festival to the Derrick May founded  Movement Detroit Festival, it was established in December 2006 as a closing event for the Winter Olympic Games. Given the main sponsor for the event, Kappa, used the slogan “People on the Move” and the similarities between Detroit and Turin, two of the world’s leading automotive centers, the name Movement was a natural fit and May agreed to bring the brand on a transatlantic journey for the very first edition, which gathered 2,500 people for one hell of a party.

Since then, Movement has moved from strength to strength and returns this year bigger and better than ever. The festival takes place in a number of venues across the city, with the Main Event happening in the colossal Lingotto Fiere, a world-class trade and exhibition center, on 31 October.

The lineup on the night is as good as you’re likely to find in any electronic music festival with acts including Jamie Jones, Joseph Capriati, Amelie Lens, Anastasia Kristensen, Anotr, Denis Cruz, Eddy M, DJ Bone, Pawsa and Michael Bibi.

The next day, 1 November, the event moves to another city venue, Wow Club (yet to be confirmed) for Club Episode, where the music will be supplied by Brina Knauss and Magit Cacoon. The following night, 2 November, you can catch the second part of Club Episode and closing event in Audiodrome Live Club, where the vibe goes very much old school techno with two legendary selectors, in the shape of Derrick May and D-Wynn, taking us back to Detroit for one night only.

Unlike many festivals, with various stages all competing with each other, Movement’s lineup, structure and schedule mean there is very little clashing, making it easy for you to catch everyone you want to see play.

For us, our top picks were pretty easy to select, we start with the headlining back to back set from Jamie Jones and Joseph Capriati. While this may not sound like an ideal matchup, the pair have gone back to back on many occasions and it works a treat. Having delighted the crowd with one of the stand-out sets on the Resistance stage at this year’s Ultra Music Festival, Miami, we’re excited to see what they have in store for the Torino crowd.

Our next selection is Amelie Lens. The Belgian Queen of Techno has taken the world by storm in recent years, thanks to her relentless sets and no-nonsense techno productions. She’s been extremely busy on the festival circuit and we’re looking forward to catching her one last time this year in the Lingotto Fiere.

For our last pick, we’re stepping away from the Main Event and looking at day three in Audiodrome Live Club for Derrick May’s set. When it comes to techno, you’ll do well to find anyone who has been more influential to the genre’s roots and evolution than this guy. It’s a real honour to get to see one of his sets and he’ll also be playing alongside D-Wynn, who is another one of techno’s pioneers, so this is an opportunity that’s far too big to be passed up.

Acts To Look Out For

So, we’ve given you our top picks, and now we’re also going to give you the acts you may not yet know but definitely should be on your radar.

Our first selection is Michael Bibi. He’s a man who has been making a real name for himself in recent years, his brand Solid Grooves is one of the industry’s fastest growers and he has just been named as the winner of the Tech House category at this year’s Ibiza DJ Awards. We’re really excited to see what this rising star has in store for Movement.

Next up, we’ve picked Eddy M. Eddy is an Italian DJ and currently holds one of the most sought after residencies in the whole electronic music industry with elrow. This year he’s been touring with the brand all over Europe and constantly releasing new music on labels such as Dirtybird, elrow and Solid Grooves, we’ll definitely be catching his set at the Main Event.

Our final selection is Brina Knauss, who you’ll be able to catch at Club Episode on day two of the festival. This Slovakian DJ has seen her stock rise considerably in recent years and has been touring continuously since 2016, taking her to the far-flung corners of the world, including regular appearances in some of the world’s most influential clubbing destinations, Ibiza, London, New York and Berlin to name just a few. Make sure to catch her set!

The main aim of Movement Torino is to make sure that all of their patrons enjoy the festival in a way that is respectful to each other and their environment. They prioritise their venues, their lineup and their sound systems as they see these as the triumvirate needed to throw the perfect party. By ensuring these elements are as good as they can be, Movement Torino are confident that everyone who attends the festival will have an enjoyable experience.

As well as the music, Movement Torin is putting an emphasis on culture during this year’s festival. The Cultural Programme will look to educate people on issues and themes that are connected to the music industry, with workshops and seminars taking place in institutional locations in the days leading up to the festival, including; Sound Journey @ Torino Airport on 25 October (Date TBC) and the Politechno Workshop “Economic and environmental sustainability of music festivals” taking place on 28 & 29 October (Date TBC).

How To Get There

With Turin being one of the largest cities in northern Italy, visitors can travel to and from the festival with some ease. For those coming by plane, Torino Airport offers access from many of Europe’s major airports.

However, there are also plenty of other options for those who wish to do their travelling by land. The city is well served by rail, with stations of note including Torino Porta Nuova, Torino Porta Susa and Torino Lingotto.

By road, there are a number of bus and coach options, with Flixbus operating routes from many locations across Europe, they’re even offering a discount to people traveling for Movement Torino, you can download the code at movement.it now.

This year, Movement Torino is working with a number of partner hotels and offering lots of different ticket and accommodation packages, to suit any budget. These hotels have been carefully selected to optimise visitors’ ease of movement while they are in the city, offering easy access to the festival’s various locations and also other cultural and notable attractions. This festival is showcasing more than just music and is designed to promote tourism in Torino and give its visitors a city-wide experience. You can find more information on these packages here.

If you would like to book your own accommodation, Torino has many hotels and hostels for all budgets.

Or you could try out one of the many cool Airbnbs the city has to offer.

Tickets for Movement Torino come at the regular price of just €40. If you’re used to paying for festivals tickets in the UK, we’re sure you’ll agree that this is an absolute bargain, considering the quality that will be on offer over the course of the festival.

If VIP is your thing, you’ll be able to upgrade your ticket and get all of the additional bonuses for just €70, which is still a total steal for what you’ll be getting. If you’re interested in taking one of the ticket and hotel packages, prices start from just €67.50 per person. Everything you need to know about tickets and prices can be found here.

Movement Torino is an almost completely money-free environment. As of last year, the festival has opted to use the Cashless system, guests will be invited to pick up a card which can be topped up using cash or credit card and can then be used to purchase all consumables at the festival. A competition for registered Cashless users will see a lucky few pick up some awesome prizes and free festival credit. Cashless cards from Movement Torino 2018 or Kappa Futur Festival 2018 & 2019 can be reused at Movement 2019.

As well as their long-standing relationship with Movement Detroit, Movement Torino is also run by the very same production company as Kappa Futur Festival, one of the world’s most recognisable electronic music festivals and newly announced winner of this year’s Best International Festival prize at the annual Ibiza DJ Awards.

To really understand a festival or a city you have to live and breathe them. So, to give you one last insight that only people on the ground would know, we decided to go straight to the source, the people behind the festival to give you some insider information on how to make the most of your time at Movement Torino.

Torino airport is only half an hour away, there you can find a direct bus to the city center.  Start the evening with an aperitivo in San Salvario district one of the most lively neighborhood full of pubs and every kind of restaurants where young people love to hang out in the evening. Our suggestion for cocktails is Gørilla (Via Bernardino Galliari, 20).Another charming area is the Quadrilatero, the city center oldest part. There you can grab a slice of pizza at Taglio Pizza Perfetta (Largo IV Marzo 17C) or taste a glass of organic wines with delicious tapas at Banco Vini e Alimenti (Via Mercanti, 13F – better to book in advance).

If you wish to experience the baroque atmosphere of the city you should go to Caffè Mulassano, a bar that dates back in the 1907 (Piazza Castello 15), where you can try the bicerin, a specialty from Torino made of coffee, chocolate and milk cream. If you play music, Gravity Records is a shop to check out with both new and second-hand pieces (Via Luigi Tarino, 7)

Movement is held during the Contemporary Art Week: there are fairs and exhibitions all around the city (full program here: http://www.contemporarytorinopiemonte.it/).