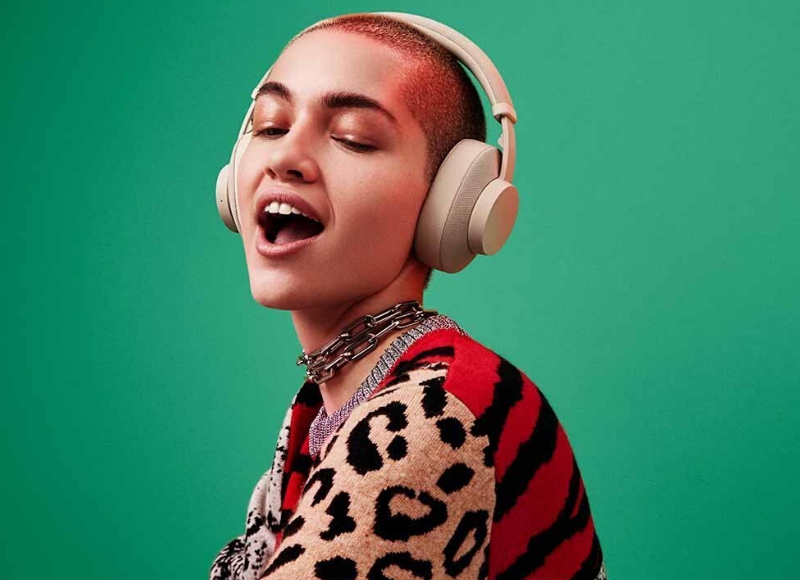 In Ibiza Club News tower (not actually a tower), we’re very much of the opinion that a set of headphones should be more than just two half oval shapes that sit on the side of your head and play music. If that was the case, we’d all be walking around with half an easter egg with tiny little speaker inside them sellotaped to both sides of our faces and, while we‘d definitely get ourselves into some delicious binds, the chocoalte would inevitably melt and we’d be left looking rather stupid.

In other words, a set of headphones should not only play music, they should also look good. Granted, if you’re some sort of nerdy music producer and you want to spend £1,000 on a set of magical headphones that can hear a pin drop in China, then you’re probably not too worried about how they look because you’ll be locked away in a dark studio every time you use them, but for those of you who, like us, want to look at least slightly respectful when out and about listening to some tunes, you’ll want your headphones to look nice too.

So, we went on the hunt for a set of headphones that both looked and sound cool and we came across the Urbanears Pampas bluetooth headphones which, on first inspection, seemed to tick all the boxes for us.

The Pampas headphones are an over ear-headphone. This got a little bit confusing for us, because thought it meant you put them above your ears. It seemed plausible, you put them above your ears so you can listen to music and still hear other stuff too, in this day and age, with the advances in technology we’re currently seeing, nothing would surprise us, so we though nothing of wearing the headphones above,or over, our ears. We were wrong, we couldn;t hear anything and eventually we realised it meant to put them over your ears, not in your ears.

Now, maybe we were being naive, but we thought that all headphones went over your ears on your head, and earphones go in your ear, so calling them over-ear headphones just complicates things, we’re probably thinking a little too much into this so we’re not knock any marks off for this little detail, but we just want to make you all aware of it so you don’t spend half a day with them on the wrong part of your head, like we did.

Moving on, we decided to go with the almond beige option and, we have to say, our first impression was that these are a very handsome pair of headphones. They’re a quite future-retro looking. They wouldn’t have looked out of place as a prop in one of the original Star Wars movies, which is pretty much the exact look we were going for. They’ve also got bluetooth 5.0, which means no ugly wires to look at and no complicated tangled messes to unravel everytime you want to use them.

When you do eventually get them on the right part of your head, the padding on them is extremely comfortable, so much so,the only way you;d know you’re actually wearing them is because you can feel them on your face and hear the music coming out of them, but apart from that, you genuinely wouldn’t even know they were there.

We put them on, and we listened to music with them, and we liked it. We’re not sound experts, but these headphones sounded good to us. If you’re one of the music producers we mentioned above, you may not agree but we guess if you’re one of those guys you’re probably never truly happy with sound quality, even though it’s most likely because you’re always listening to your own crappy music.

Before we used the Pampas, we gave them a full charge and the battery life on these bad boys is extremely good. We heard they lasted for up to thirty hours so we decided to put on one of Marco Carola legendary 24 hour DJ sets to see if they could last the pace, unfortunately Marco Carola’s sets put us to sleep quicker than a cup of warm milk so we were out cold in a matter of minutes but when we woke up, fully refreshed, fifteen hours later, the headphones were still going strong so we’re very impressed by their stamina.

Another thing we liked about these headphones is that they are completely collapsible and fold up nice and neat to fit into your pocket. This is great for someone who is planning on using these while traveling or commuting to work. It’s also great if you have annoying colleagues, family members or housemates who like to borrow your shit without asking, as it makes them extremely easy to hide, even when space is at a premium. Also, there’s a 3.5mm jack on the left ear that you can plug another set of headphones into, so if you’re traveling with a companion, they’ll also be able to listen to the music you’re streaming without needing to get a headphone splitter.

The Pampas also come with an awesome little control knob on the right ear and like most knobs, once you master it, it becomes really fun to play with and easy to use. You’ll be able to skip through music, scroll, play and pause using this feature. Beside the nob you’ll find a micro USB-C that you’ll need to charge your headphones,unless you’re a X-Man and you’ve got the power to charge stuff with your hands, which would be useful but not great for fighting the forces of evil. There’s also a handy little LED that will keep you informed on your battery life.

Now, the all important question. How much will the Urbanears set you back? The answer, you can get a pair of these headphones for just under £135 (€150) which is a pretty good price for a set of wireless headphones. There are other options out there that probably have slightly better sound quality, but you’ll be paying extra for them so all in all, we think the Pampas are good quality for what you pay.

Overall verdict, I want to look like a character in an 80s space ballet with cold ears while I listen to music, so definitely would buy.

A Virtual Trip To Paradise

Afterlife Opening – Thursdays @ Space Are On!

Carl Cox Knocks Our Socks Off at Space