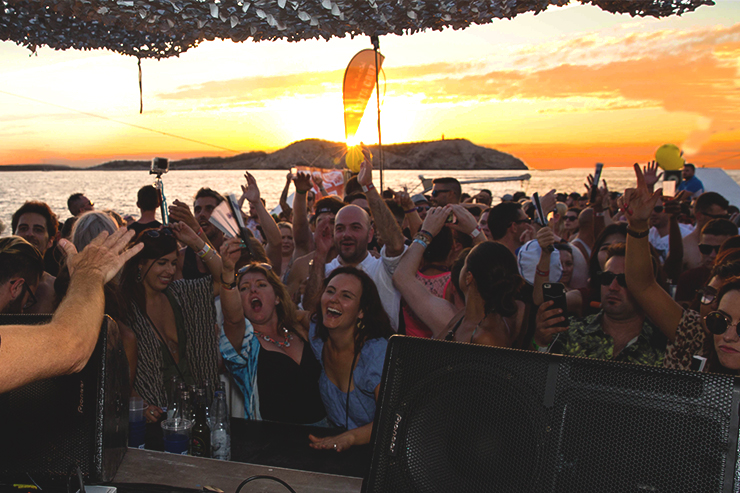 If you’re a regular reader of Ibiza Club News, you’ll probably have noticed that we’re quite partial to a good old boat party. There’s just something about being out at sea, listening to good music and dancing with some like minded luatics that really makes us feel at home.

When we’re in San Antonio, there’s only one boat party for us, it is of course Float Your Boat. To put it simply, they’ve got the best boat, the best sound system and the best DJs you’re going to find on that side of the island and paying to go on any of San An’s other boats simply doesn’t add up for us.

So, we’re sure you can imagine how glad we are to hear that the team at Float Your Boat will be returning for their seventh season and it’s looking like it’ll be a season to remember with the crew revealing they will be setting sail more than ever this year with over fifty boats packed to the rafters, or whatever the nautical equivalent of rafter are, with some of the island’s most intune clubbers.

So far, Float Your Boat have confirmed they will be casting off for their famous sunset boat parties on both Tuesdays and Saturdays. Now, we’re no mathematician but something doesn’t quite add up here, fifty sailing, with boats departing Tuesday and Saturdays leaves us a little short. We’re expecting the team will be announcing another day soon so keep your eye on Ibiza Club News for an announcement in the coming weeks.

There are two ticket options available. If you just want to go on the boat you can take option one and get yourself a boat only ticket. This will give you entry to the tree hour party where you’ll get to enjoy music from a top class DJ off the art, custom build Void and Pioneer sound systems. No acts have been confirmed yet but previous DJs include Carl Cox, Fatboy Slim, Eats Everything Roger Sanchez and Paul Van Dyk to name just a few so you can expect something good.

New for this year, your ticket will also give you access to the open bar, that’s right we said open bar, for the duration of the party. There’ll be beer, cava, sangria and soft drinks flowing for the full three hours which is a really big extra for this summer.

Now, if you’ve got any sense, we think you’ll take option two, the combo ticket, which will give you everything you get with a boat only ticket but also includes a few really awesome extras. If you get a Tuesday combo ticket you will get entry to O Beach, before 2pm, and entry to Hï Ibiza, before 1am, on Tuesday night for Bodywork, where you’ll be able to catch Soloardo, Fisher and Camelphat.

If you get the Saturday combo ticket, you’ll get entry to Hï Ibiza, before 1am, on your choice on Saturday, Sunday, Monday or Tuesday nights. So far we know that Tuesday will be Bodyworks and Sunday will be Glitterbox, and we’re fully expecting Saturdays and Mondays to be something equally as good. Combo tickets even come with a free bus from San Antonio to Playa D’en Bossa to save you having to make your own way there after the boat.

We were expecting Float Your Boat parties to bust this year, but now that they’ve announced their combo tickets and an open bar we’re expecting them to be absolutely rammed. So, as always, we advise anyone who wishes to attend one of these parties to buy your ticket nice and early to avoid disappointment later. You can get them over on the Float Your Boat website now and if you’re quick you may even get your hands on one of their early bird tickets, but numbers are limited and once they’re gone they’re so you’ll need to get clicking if you want to save some money.

Resistance Confirm Epic List Of Headliners For This Season